Baby G is 13 days old today! I feel like we spent SO much time waiting for him to arrive, now suddenly he’s almost 2 weeks old in a blink of an eye! Probably because the sleep has been lacking and almost every day has blended into each other, but hey, that’s life with a newborn right?
In other news, Bomber absolutely LOVES his new baby brother, and our first introduction was AMAZING, even better than we had hoped for to be honest. 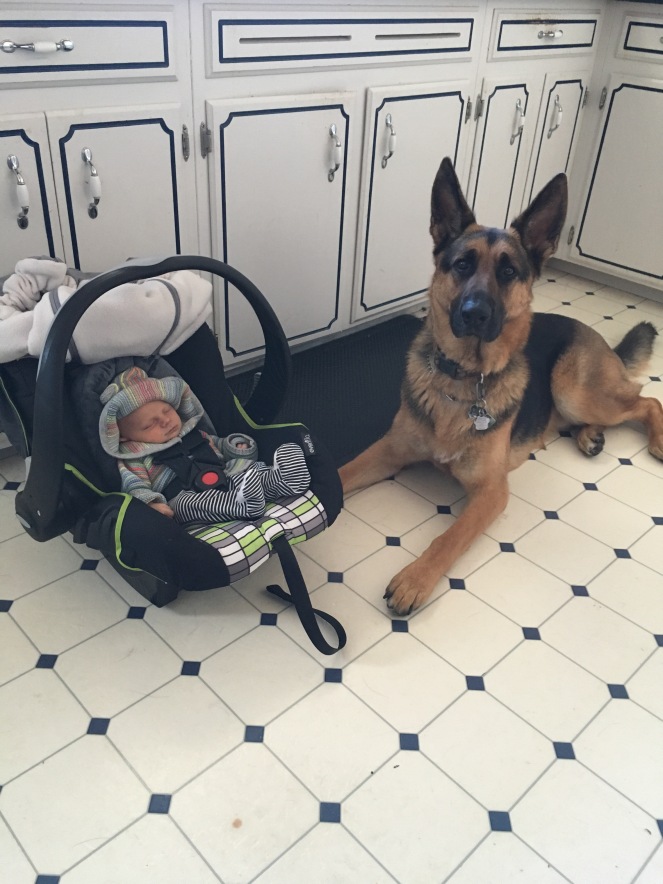 Here’s how it went:
Baby G and I were discharged from the hospital two days after my C-Section, and I had spent three nights away from home (I stayed at the hospital the night before just so I didn’t have to get up as early), so we knew he was going to be excited to see me, then we weren’t 100% sure how he was going to react to Baby G, so we asked Jared’s parents to come and going into our house first to corral Bomber, because I couldn’t have him jump up on me or carry Baby G into the house in his car seat, I was moving very slow and awkwardly two days post-op. So the five of us pull into the driveway and of course Bomber is waiting at the window, he had sporadic visits from Jared and my brother throughout the day the past two days, and was feeling very ‘woe is me’ even though he had been fed, walked and taken out for bathroom breaks more than enough times – he had been used to me being home all day as I has been on Maternity Leave for a month previous, so he was lonely.
So Jared’s parents go in and clip him to his leash just to guarantee he won’t pounce on me when I get in (just turned two that week, he’s still very excitable), so I go in and while he’s excited, he instantly turns to concern, I’m walking funny, he can likely smell my incision and where was my Bump? Instantly Bomber’s excitement turns to concern, which of course is understandable. Then Jared came in win Baby G in his car seat and we all move to the living room. We kept Baby G in his car seat and we were holding it on the couch, and Bomber didn’t realize he was there at first. When he finally did, Bomber went from an energy level of 11 to a 3, folded his ears down (not in the scared way, but in the curious way) and gently stuck his nose into the car seat, gave Baby G a thorough sniff, then kissed his face and did his little excited whine. Baby G just sat there still fully asleep and didn’t seem bothered by the huge German Shepherd nose invading his space! 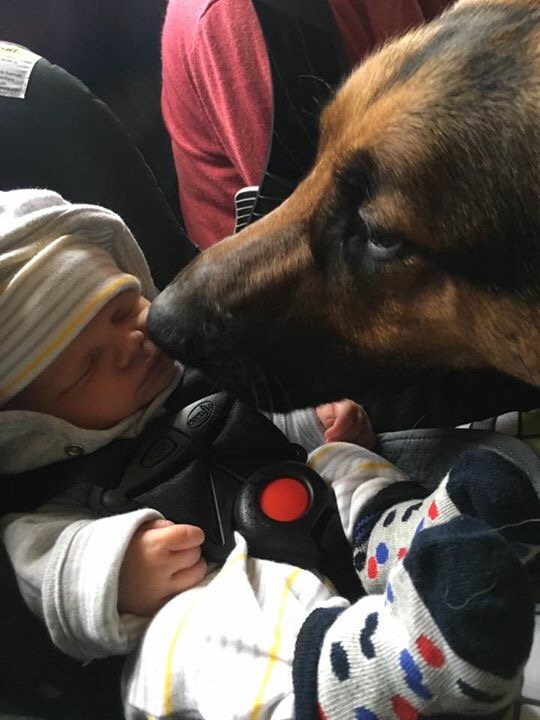 Since then, Bomber has been awake with us in Baby G’s nursery every night, is always checking on him and gives us the stare down if we don’t run over to Baby G the second he makes any noise! I’m convinced that Bomber knows that Baby G was in my belly and that’s who we’ve been talking about all these months and that’s who he could feel moving around when he laid on my belly.

We honestly couldn’t have asked for a better reaction from Bomber, but it wasn’t a fluke.

Here’s how we did it:

This seems tedious, but having a baby completely overhauls yours and your dog’s life, and all of these new and confusing items are going to be coming into your house that may scare your dog. We had our stroller set up in our living room for months before Baby G came.

2. Establish any new rules or beef up training

This may seem like a no-brainer, but with all of the excitement of pregnancy and preparing for baby, people often forget that their dog is t going to instantly adapt to the baby, especially if they just aren’t familiar with babies and small children. Bomber is very comfortable with small kids, so that part was covered, but it was really working on some of the habits in our house that needed working on. Mainly two things: getting on/off furniture gently and not rushing the door when people come into the house. They were works in progress when we found out I was pregnant, and they became priorities for us. Now, all these months later, he’ll go lay on the couch (in his spot) when someone comes to the door and instead of jumping onto the bed and the couch, he will just climb up.

Bomber ever so patiently waiting for @jared0313 to come say hi after coming home from the gym 😁 his patience is improving constantly! No puppy rushing the door if he's waiting on the couch 👌🏻👌🏻

3. Set up your nursery/baby’s sleeping arrangements as early as possible, and establish the rules around the new set up

Baby G’s nursery is a room we only used for storage, so Bomber spent almost no time in there. It was fairly easy for us to establish new rules in there: he is not allowed on any of the furniture in that room, and he has a blanket in a designated spot by the change table so that he isn’t underfoot when we’re doing our thing in Baby G’s room. We also require him to be at a slower pace in the room, no barrelling in swinging a toy around. If he comes in too hot we direct him back out of the room to try again. 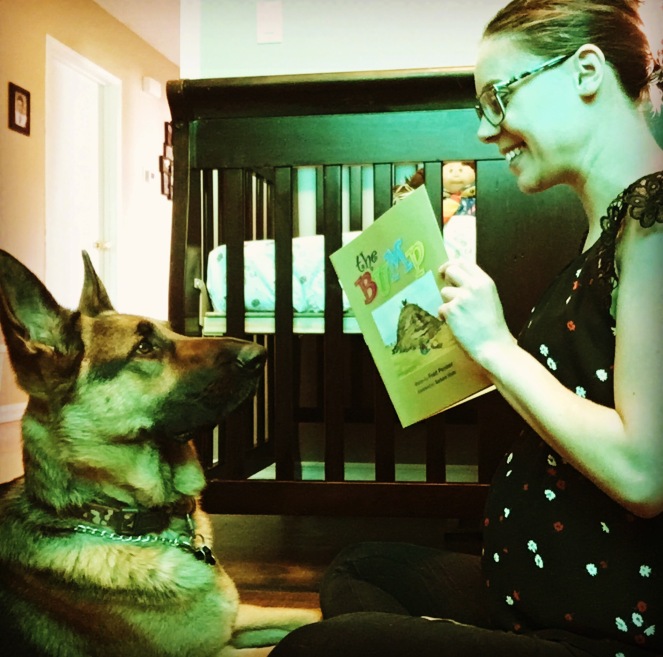 4. Talk to him about the baby

I don’t know what effect this had on Bomber’s reaction, but we talked to Bomber about the baby every single day. He always did the head tilt side-to-side as if to acknowledge everything we were saying, but regardless we talked to him about the baby a lot!

5. Plug in and use any baby items that make noise

Bomber is a bit anxious, so it was important to us that he knew what sounds the baby things were going to make, so we could get him comfortable with them before Baby G was inside them, in case of a scared or negative reaction. What I did was I would have him sit beside me and I’d run the swing or some noise making toys and let him sniff them out, but he was not allowed to put his paws on them. He learned pretty quickly that they were not a threat to him, and he hasn’t been bothered with anything so far we’ve used with Baby G.

6. Once baby arrives, send home blankets that the baby was wrapped in so he could learn the baby’s scent

This is probably the one that guaranteed our success since bringing Baby G home, every night Jared brought home a blanket that we had Baby G wrapped in that day and he would present it to Bomber to inspect. We are sure that when Bomber locked on to Baby G’s scent when we brought him home, he knew exactly who he was. TIP: do not let your dog play with that blanket, it is for smelling ONLY. You do not want your dog thinking they can play with baby blankets.

7. Include your dog, they are your family too

A lot of people forget this one. Your dog was your fur baby before the arrival of your baby, and the arrival of your baby does not change their status as your family. When Baby G was born we became a family of four, because Baby G’s birth does not change the amount that we love Bomber as our family. Yes, the overall dynamic of the house has changed, but Bomber is still a big part of our family. He loves sitting and watching us do things with Baby G, and he’ll sit there and we’ll just talk to him and tell him what we’re doing. Your dog still needs and deserves those loving humans you were to them before baby arrived, so don’t put them on the back burner or rehome them, you’ll regret it once things settle in your house.

Have you gone from a pet-parent household to introducing a new baby? What were your successes? Let me know in the comments!

Until next time,
Amanda xo.