Did 2017 fly by for anyone else? I feel like we JUST celebrated New Year’s and I just found out I was pregnant with Baby G! But here I am, sitting at my kitchen table writing this after putting my almost 3 month old son to bed! Where did the time go? I’ve decided to take a look back on the year that changed my life and share it with all of you! Enjoy! 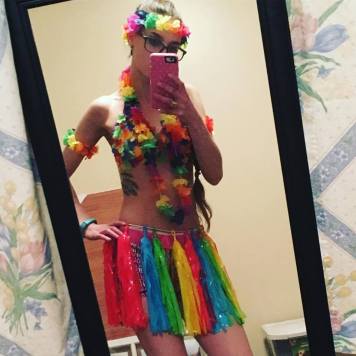 We kicked 2017 off with a bang! We had all of our friends over for a New Year’s Eve/Birthday Party (for myself and two other friends) with an ABC (anything but clothes) costume theme! It was a fun night!I also turned 28 a few days after new years and spent most of the next month thinking I was fighting off a flu bug. 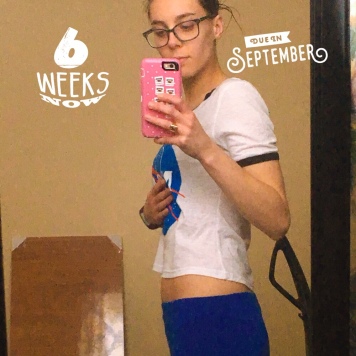 Right at the beginning of February I found out I was pregnant with Baby G, I was about 6 weeks along and my exhaustion was suddenly justified and understandable. While we told our parents and a few select other people, we kept it a secret for quite a while after this. We were excited but nervous, and so far away from meeting our baby! I also took most of February and March off from my blog and attached Instagram account, I wasn’t doing much of anything to talk about and thought that I was going to let things slip before we were ready to tell people.

I'm back! With a completely different focus, guess what guys? I'm going to be a mum! In the past few months since we found out, I've decided to walk away from my Beachbody coaching gig, and there is SO much to do! Check out my latest blog post, the first in my 'Pregnant Diaries' series! Link in the bio 💕💕

Near the end of March we decided to tell everyone we were expecting a baby! We Used this adorable picture to announce in on Facebook!

Chillin in my new @fpenner5 shirt after an AMAZING concert and an amazing day! Nothing beats seeing your favourite musician from your childhood (and adulthood) and singing Sandwiches at the top of your lungs with your niece and nephew while everyone comes out in support of our Library 💕💕 thanks for a great day everyone! Hope to see you at the Library soon!

The highlight of April was definitely the Fred Penner concert that my workplace put on at our local highschool, it was an AMAZING day, and I will always love Fred Penner!

Jared, Bump and I are about to Rock out to the Red Hot Chili Peppers 🎶

We saw Red Hot Chili Peppers in May! I also did my first Fetal Assessment and found out that Baby G was a boy!

Dog friends! Flirt poles are seriously the greatest thing ever, Bomber is OBSESSED with his even though he ripped the duck off and he's just chasing a rope lol great training tool and energy blaster 🐶

June ended up being a month that I mostly just hung out with my dog Bomber, we worked on training, bonded more than we had anytime previously and got the most exercise that I was able to do my entire pregnancy!

Why buy dog specific products when they just want to use yours anyways? 😂 Bomber and I definitely share my @jollyjumperbaby Mama Sleep Eze Body Pillow!! Anyone who has a Velcro Furbaby knows you have no personal space, ever! Good thing this pillow is big and comfy enough for the two of us 👌🏻🤰🏻

July was a lot of fun, we got a new vehicle, spent time with friends, saw Baby G on my second Fetal Assessment, did major work on the nursery and I was on my way to winding down my time at work!

It's my first official day of Maternity Leave! Which means I can get into the full force of my nesting! Today's task – washing all of the cloth diapers I've accumulated through my pregnancy! I've got a new post up all about how *frustrating* nesting has felt for me! Link's in the bio!!!

Mid-August was the start of my Maternity Leave, about a month before my due date. I was SUPER anxious that I was going to go early and I was obsessively researching labour and natural deliveries – which didn’t matter in the end anyway.

New post up on the blog!!! I wanna know what YOU think? Boy or girl? Big or small baby? When they'll be born? Check out the link in the bio and tell me your guess!!

Been a little MIA, but we welcomed baby Gavin on September 20th at 9:50 AM and we have been adjusting to our new life as a family of 4 💕💙 we are so in love!! check out the link in the bio for all of my queued content!

Baby G joined us on September 20th at 9:50 AM via scheduled c-section! I spent the entire month at that point hoping and wishing that he would flip from his breech position and I would be able to attempt an all natural labour and delivery, but I would not change my c-section experience for all of the natural births in the world (I haven’t blogged about my birth experience yet, but I’m starting to feel more ready to). Our lives changed for the better and we were FINALLY a family of 4!

Bomber and Baby G had an instant bond 💙💙 and we can just tell that Bomber decided the second we came home from the hospital that we had a new member of our pack! Bomber is as sleep deprived as the rest of us! He's been right there with us, watching over his new little brother 👶🏻💙🐶

October was G’s Baby shower and his first Halloween! It was also when Jared went back to work and I was alone with G and Bomber all day without any help. It was very overwhelming at first! At this point G was starting to scream ALL THE TIME and we determined that he in fact was colicky, but it was manageable as he has already started to sleep through the night more consistently, and as my mum and grandma say – you can tackle anything during the day if you’ve slept at night!

#soundon🔊 this is how G woke me up through the baby monitor this morning 💕 love when he wakes up happy!

My personal milestone of November was that we seemed to surpass the worst of baby G’s colic and he started being a genuinely happy baby about half way through the month! A lot of stress had lifted with this turn in the road! G also had his two month shots and we were both traumatized by it and we both passed our 6 week postpartum checks with flying colours!

Yupp, I’m THAT Mum, this is in G’s room above his change table, and currently the only part of our house decorated 🎄😂

G’s first Christmas! Turns out, he really DOES NOT like Santa! We tried at the mall and at my parents house (they brought a Santa in from our local fire department, which our family does every year for the kids), and he was not really down! Check out my post here about his first Christmas! 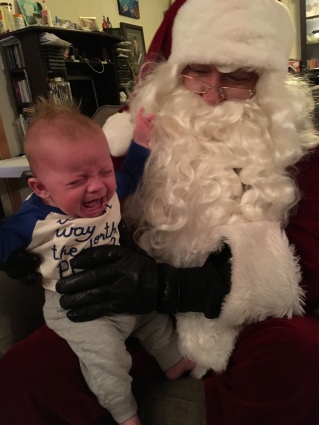 Now tonight we will be celebrating New Year’s Eve! I can’t wait to see what 2018 brings!

What were your highlights for 2017? Let me know in the comments!